Gallen to fight Huni. This guys a legend. Steps it up again. Has no fear whatsoever, good luck to him. Hope he somehow manages another win, against the odds.

Paul Gallen urged Dean Lonergan to sharpen his pencil, and that's exactly what the promoter has done, confirming a deal is close to being finalised to have Gallen fight rising heavyweight star Justis Huni on June 16.

Speaking to Sporting News, Lonergan confirmed the scheduled date, saying he hoped to lock down a venue this week before the contracts are finally signed.

Lonergan said Sydney is the preferred option, but didn't rule out Brisbane or the Gold Coast with Huni's Australian heavyweight title set to be put on the line.

Gallen is coming off a remarkable first round knockout win over former heavyweight world champion Lucas Browne, and wants to fight Huni before the Brisbane-based boxer heads to the Tokyo Olympics.

According to Lonergan, that spells disaster for the former Cronulla Sharks captain.

“Paul Gallen is either Australia’s bravest man, or Australia’s stupidest, and I think it’s a combination of both,” Lonergan told Sporting News .

“He’s caught Justis Huni at the worst possible time. Justis is still slowly making the adjustment from amateur into professional and that means right now, he’s not sitting down on his punches and hitting as hard as he can.

“Paul Gallen, instead of having a merciful knockout in the first or second round with unbelievable, awesome power – which is going to come with Justis – he’s going to have the living crap beaten out of him over four or five rounds and it’s going to be a slow destruction for Gallen.

"Justis is very well prepared and this is going to be a slow beatdown, and it’s unlikely Paul Gallen will want to fight after this.

Gallen had previously campaigned for a fight with Rob Whittaker, but turned his attention to Huni following his win over Browne in Wollongong in April.

In a video he posted to social media last week, Gallen said the offer put to him to fight Huni wasn't enough.

"You want it to happen, make it happen. Sharpen the pencil, ring me back – you’ve got my number."

Lonergan says his revised offer should be enough to entice Gallen into the ring, and hit out at Gallen's demands.

“He came back last week and said ‘sharpen your pencil’ and I’ve sharpened the pencil as sharp as I can possibly get it,” Lonergan said.

“Here we are, we’ve got an agreement and we’re closing in very fast on getting a signed agreement. A deal’s not a deal until we get it signed, but we’re working towards June 16. 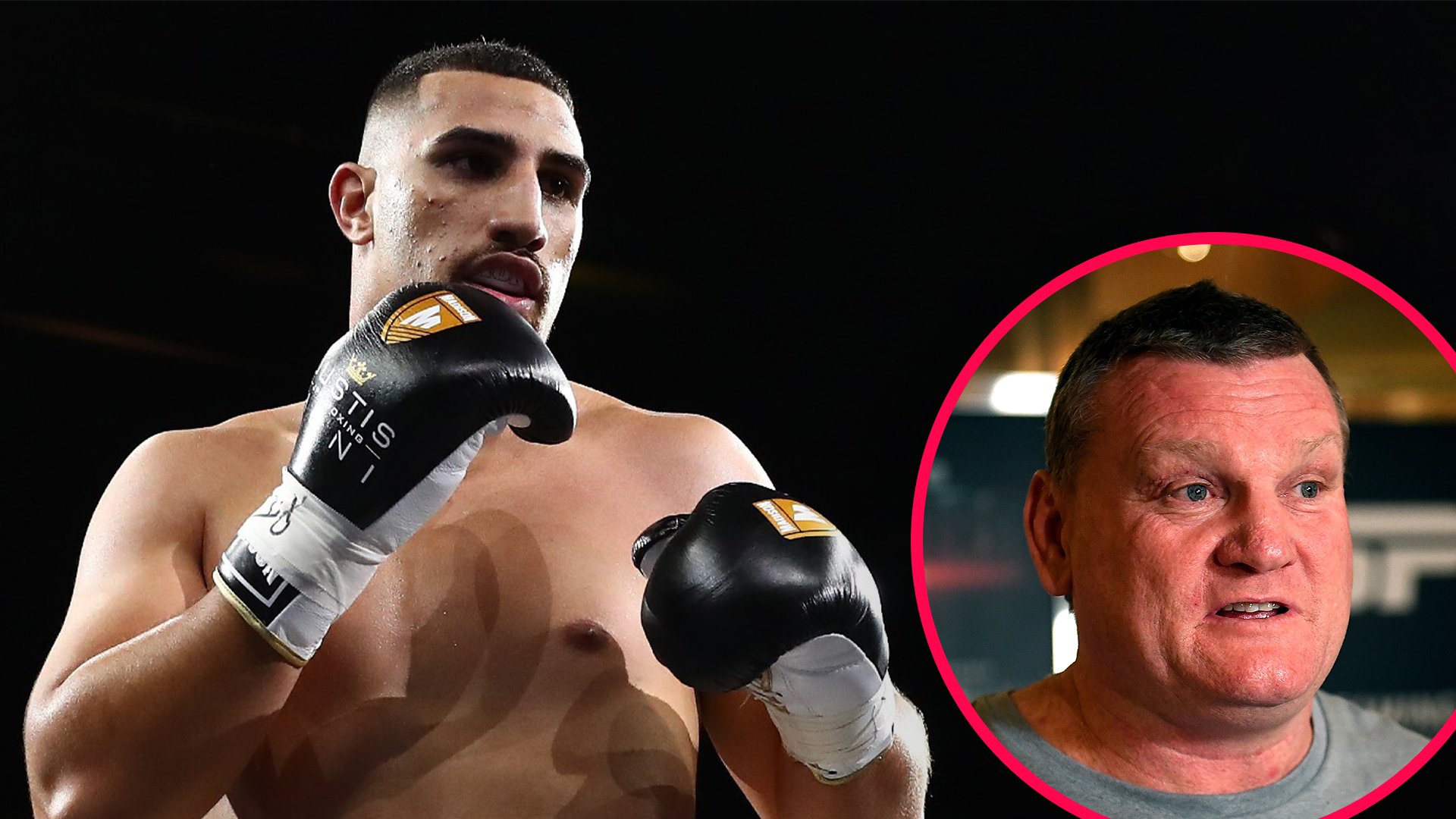 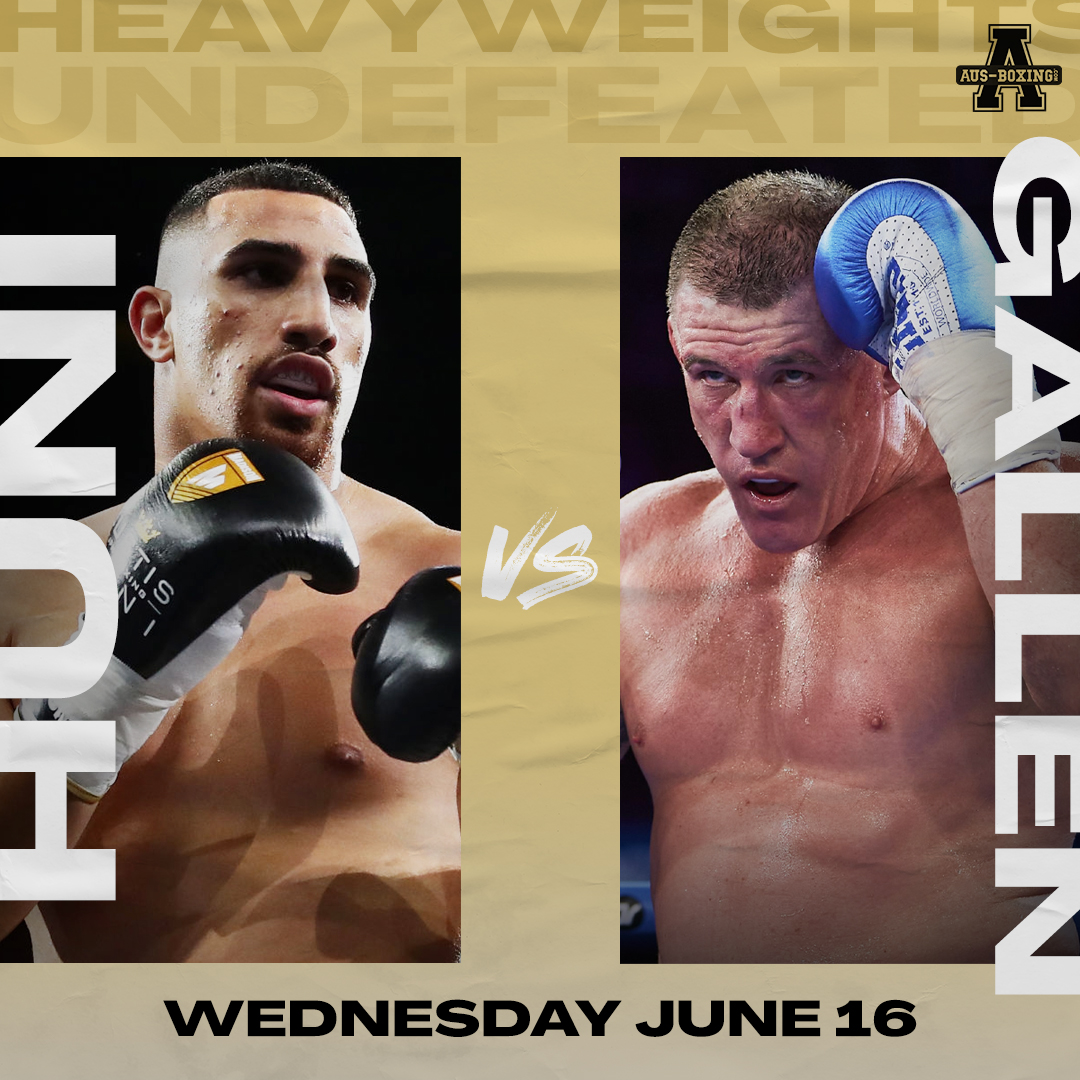 You think this bloke could put gal on his arse?

south of heaven said:
You think this bloke could put gal on his arse?
Click to expand...

A lot of people have Huni marked as a potential Gold Medalist at the Olympics, and future world heavyweight champion. So if he doesn't beat Gal relatively convincingly, his reputation will take a huge hit... and Gal will have to get some kudos.

Bulldog Wrestler said:
A lot of people have Huni marked as a potential Gold Medalist at the Olympics, and future world heavyweight champion. So if he doesn't beat Gal relatively convincingly, his reputation will take a huge hit... and Gal will have to get some kudos.
Click to expand...

Might be worth a watch then could be interesting

south of heaven said:
You think this bloke could put gal on his arse?
Click to expand...

He's quick and skilful for a big bloke. Hits hard. Seen the last 2 or 3 of his fights, one of them went into the 4th or 5th round and he was starting to gas a bit. Gallen's fitness is a big asset, should be a decent fight I'd say. 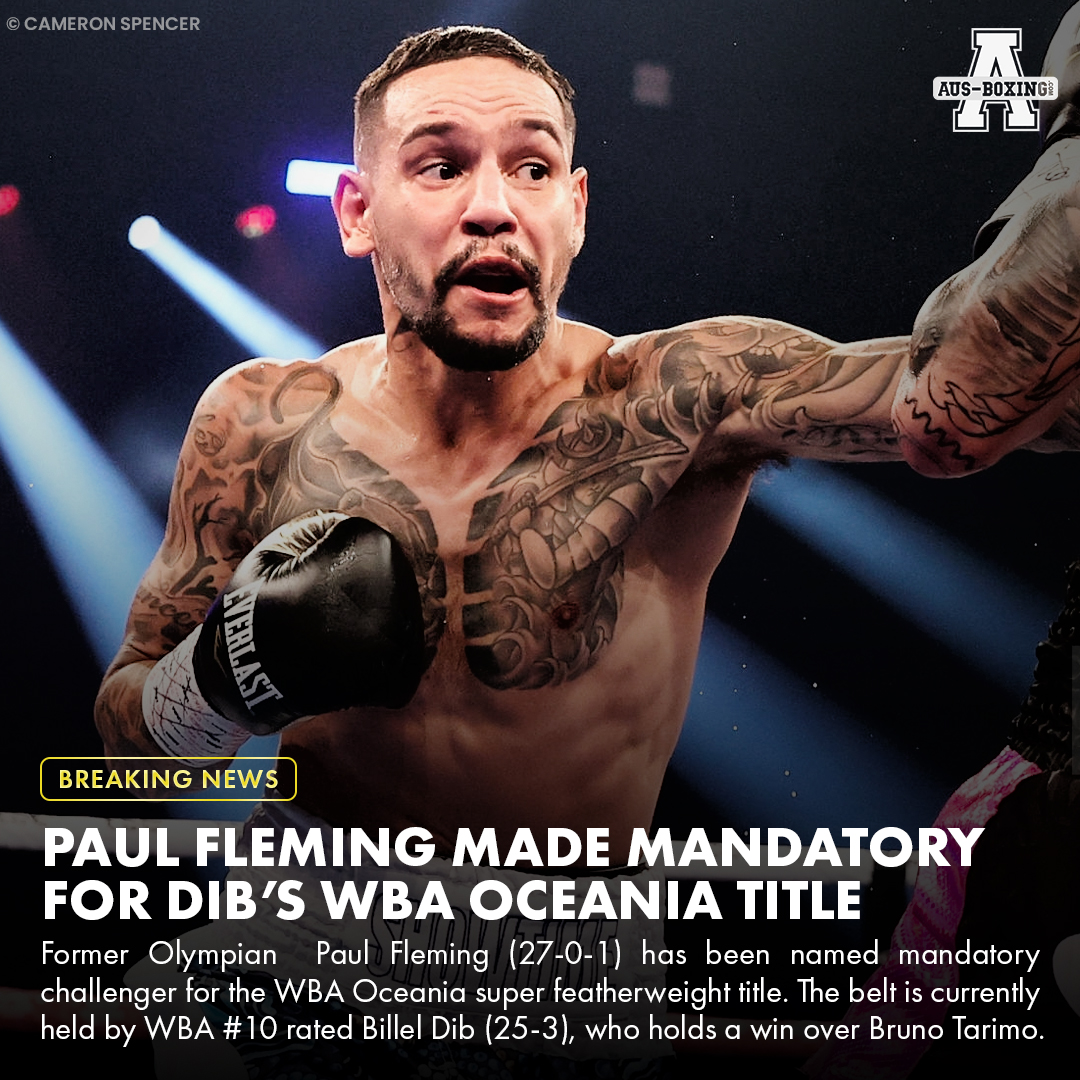 Tim Tszyu will take on Michael Zerafa in a long awaited grudge match years in the making.

The pair will step into the ring on Wednesday, July 7 at Newcastle Events Centre - the site of Tszyu's five round destruction of Dennis Hogan in March.

Zerafa most recently scored a first-round knockout win over Anthony Mundine two months ago, following his pair of fights opposite Jeff Horn in 2019.

Following his win over Hogan, Tszyu said he wanted a shot at WBO super welterweight champion Brian Castano. Those plans were dashed in April when Showtime confirmed Castano would fight IBF, WBA and WBC titleholder Jermell Charlo later this year.

Wanting to stay busy, Tszyu will now face Zerafa in a bout he once described as a "last last option if nothing else is on the table."

Though speaking at the fight announcement in Sydney on Thursday, Tszyu described the match-up as "perfect".

"We’re the two biggest names in Australia in that division," Tszyu said.

"I’ve always been aware of Michael and I’ve been watching him. This is the perfect fight for me and my career right now.

"It’s been a long build up and a lot of things said that I take personally and don’t like. We’re in the ring and we’ll be punching each other in the face."

While Tszyu will be a strong favourite come fight night, Zerafa is confident of causing an upset.

"I’ve wanted to get my hands of Tim for a while. It’s personal," Zerafa said.

"I can’t wait to get my hands on him.

"Credit to him, he’s knocked out all his opponents, but I'm a different beast.

"I’m excited, we’re both at the top of our game and may the best man win."

Tszyu has become a pay-per-view and ticket-selling machine over the last two years, while Zerafa has shared a ring with the likes of Kell Brook and Peter Quillin.

In 2019, as his rise to stardom kicked off, Tszyu placed Zerafa alongside Jeff Horn and Dwight Ritchie as opponents he wanted to fight.

By the start of 2020, Tszyu had beaten Ritchie and Jack Brubaker, while Zerafa split a pair of fights with Horn. Zerafa's hotly-contested loss to Horn in December 2019 seemingly put the brakes on a fight with Tszyu.

"He's had a four-fight plan that I was in, and now he doesn't want that fight," Zerafa told Sporting News in January 2020.

"We've contacted you three times and you've come back with injuries. We've offered you a good purse and you haven't wanted it. 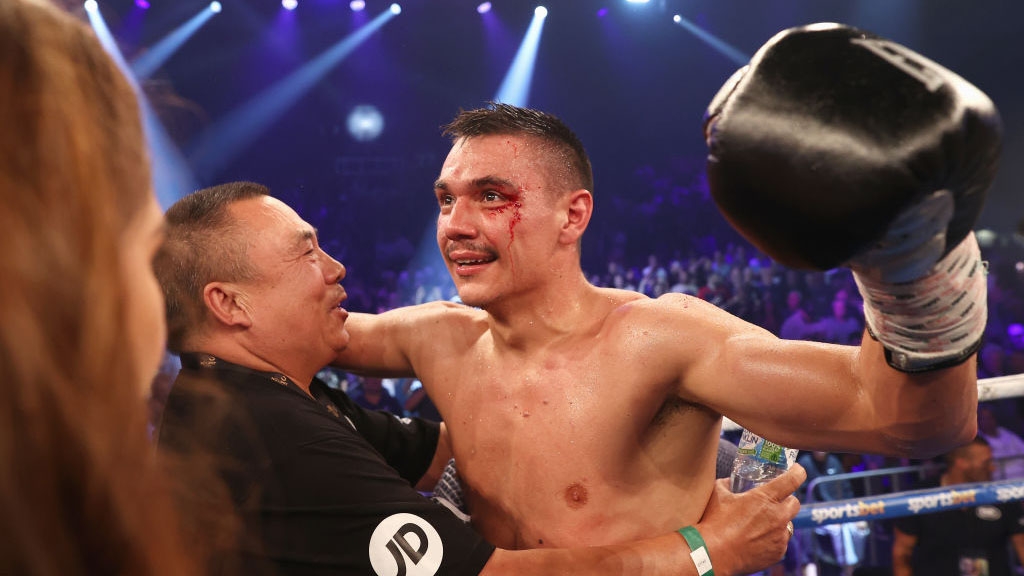 "We call him the magician at our gym, because every time a fight approaches he disappears.

"We want that fight and we believe we can beat him."

Since that interview with Zerafa, Tszyu has scored convincing wins over Horn, Bowyn Morgan and Hogan, while Zerafa beat Mundine in a little over two minutes.

Speaking in the build-up to his fight with Hogan, Tszyu was scathing of Zerafa's bout with Mundine.

“You don’t get an opportunity by beating a 47-year-old grandfather," he said.

“I think it shouldn’t even have happened. We got offered the Mundine fight and straight away said ‘it’s not happening.’

“It’s disrespectful first of all. There is a time that enough is enough.

Hoping Zerafa can give him a run for his money, TT hasn't been tested at all yet. If he wants to take on the world's best he needs more of a challenge than what he's been getting or it might be a rude shock if he travels to the US to lock horns with some of those blokes. 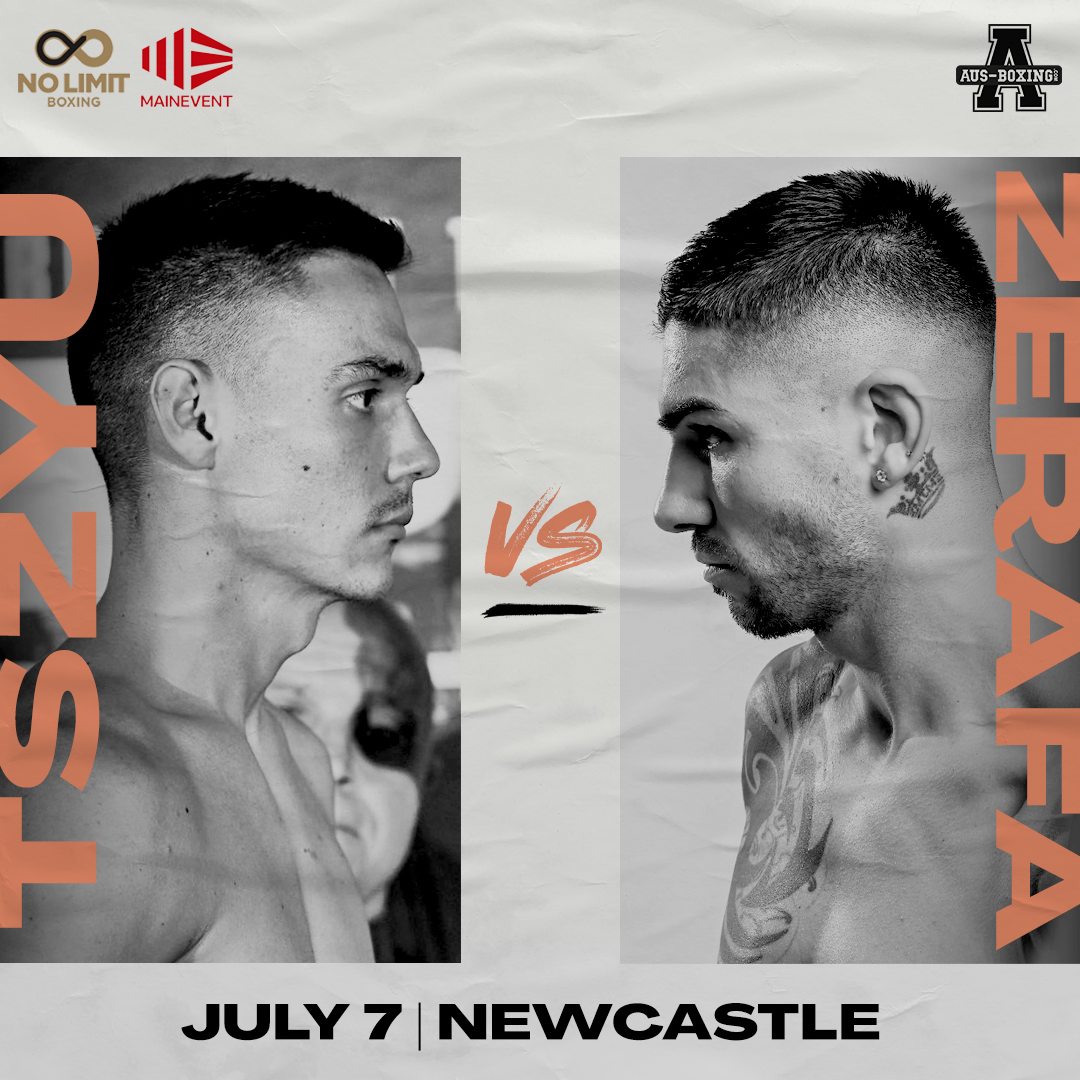 “This is the final piece of the puzzle,” Tszyu told me before the announcement, “and after everything he’s been saying and all the disrespect for all these months and years, this time it’s personal.”

“Tszyu was forced to take this fight – he wants nothing to do with me! As I showed with Jeff Horn I’m very, very dangerous and he knows that,” Zerafa told me from Melbourne airport en route to Sydney.

“I’m excited. Unlike him this is a fight I really do want and I know that come July 7 I’m going to be knocking over another golden boy and winning through to a world title shot.”

If Justis Huni is to face Paul Gallen in June he will need to emerge unscathed from a “made for TV” clash with the tough Cameroonian Christian Tsoye, to be held at the Fox Sports studios at Artarmon on Wednesday 26 May.

The fight will be staged in front of a select group of invitees and broadcast live on Fox Sports exactly three weeks before Huni is scheduled to face Gallen on Main Event.

“I hope Paul Gallen accepts the invitation to be ringside for Huni v Tsoye because in that intimate setting, with only a few VIPs watching at ringside, he will be able to see and hear exactly what he is up against,” said promoter Dean Lonergan.

“Justis’ power is still developing but he is scarily accurate, brutally fast and methodical. Gallen will leave the studio in pure fear after watching what he can do.”

Most elements have been agreed for Huni v Gallen with the bout to be held on Wednesday 16 June but Lonergan is in the process of finalising a venue before contracts are signed in coming days.

JARVIS TO FEATURE IN SYDNEY

After consecutive bouts in Canberra the world-ranked Brock Jarvis is set to act as the co-main event to Huni v Gallen back in his hometown of Sydney.

“It’s a great chance to showcase Jarvis to the audience in Sydney because plenty of them are already in love with him but it won’t be long until they all are,” said Lonergan.

“We just need to agree with Jeff (Fenech) on the right opponent and on what weight Brock is going to campaign at and we will go from there.”

Fenech is confident Jarvis has the skills to defeat current WBO Featherweight Champion Emanuel Navarrete in the near future.

BOXING ON MAIN EVENT THIS WEEKEND

Englishman Billy Joe Saunders has been complaining about the ring being too small this week but like all who face Alvarez he would likely still be a betting outsider even if he had the full gridiron pitch to work with.

This is boxing today