The Formula One Thread

Whilst a wet race would suck for those at the circuit. Its awesome for those watching on TV.

Having said that, it's at least 2 hours past my bedtime, so i'm only going to see the first few laps.
M

CroydonDog said:
Whilst a wet race would suck for those at the circuit. Its awesome for those watching on TV.

Having said that, it's at least 2 hours past my bedtime, so i'm only going to see the first few laps.
Click to expand...

Rain needs to come back and piss down. Hamilton well in front at the moment.
M

Hockenheim.... I fucking love you.

This is a quality and strange race.

Great race one of the most entertaining I've seen, did want bottas to finish to close the gap on Hamilton but couldn't get it done

Legend23 said:
Great race one of the most entertaining I've seen, did want bottas to finish to close the gap on Hamilton but couldn't get it done
Click to expand...

Kvyat had a very good race too. Yet to think Hockenheim might be gone.

WTF is with the trophies.

Congrats to Kvyat and his partner on their first child yesterday.

how to make F1 exciting is much like a cake mix... Just add water
M

G_Dog_Rota said:
how to make F1 exciting is much like a cake mix... Just add water
Click to expand...

Bernie out there with the fire hose on select corners

That was the race of the season. See what happens when there is strategy in place and not just 1 or 2 2.5 second pit stops a race.

Using today’s point system for all their races.

If you discard Schumacher’s first season as a sub driver and his 3 seasons with Mercedes his average points per race would be around 15.34. 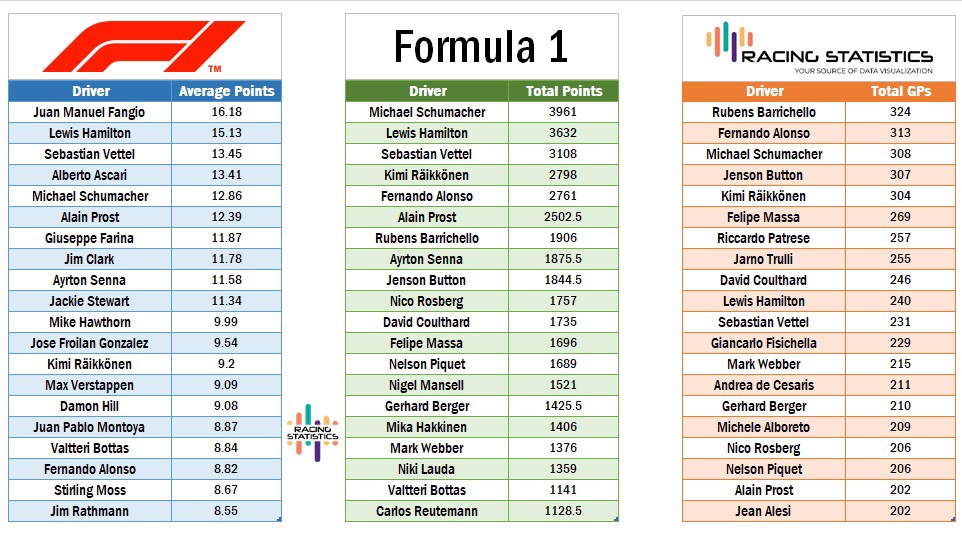 I honestly never thought this would come ..

Debbie White
The SunSEPTEMBER 12, 20196:33AM
The Sun and was reproduced with permission

Michael Schumacher is “conscious” after being taken to a Paris hospital for stem cell treatment, a nurse has revealed.

A pioneering surgeon specialising in stem cell breakthroughs has been treating the seven times World Champion driver at the Georges Pompidou Hospital in the French capital, where he arrived surrounded by guards on Monday.

He was admitted under tight security for transfusions of inflammation-reducing stem cells, part of ongoing care related to the horrific head injuries he suffered in a skiing accident almost six years ago.

Le Parisien reports that the state-of-the-art facility “has turned into a bunker” since the high-profile sportsman arrived.

Although there has been no indication as to his current state of health from the hospital, the paper quoted an unnamed nurse in cardiology saying: “Yes he is in my service.

“And I can assure you that he is conscious.”

And at 5.15pm yesterday, Jean Todt visited Schumacher for 45 minutes “before quietly leaving the hospital”, the paper adds.

An emergency intern also confirmed that the legend “is here”.

Le Parisien newspaper said the first sign of the legend, “was at 3.40pm on Monday [when] a stretcher arrived on the first floor of Georges Pompidou European Hospital.”

Schumacher was transported to hospital in a blue and yellow ambulance registered in Geneva.

A blue cloth “completely covered his body and face” as he was taken into the continuous monitoring unit of the Cardiovascular Surgery Department.

He had a security contingent “of about ten people,” the news outlet reported, adding that Prof Menasche was “in charge of the group”.

Le Parisien said that “according to our information”, the F1 ace could benefit from “infusions of stem cells that are distributed in the body to obtain a systemic anti-inflammatory action throughout the body”.

The treatment was to have begun Tuesday morning, with Schumacher reportedly expected to return home on Wednesday.

According to other unnamed sources, the champ made at least two visits to the Pompidou hospital earlier this year.

But he was admitted each time under a false name and treated by a small medical team, La Parisien added.

On both occasions, he arrived by helicopter from Switzerland and landed at a heliport in Issy-les-Moulineaux, near Paris.

During his first stay in the capital, Schumacher underwent tests at Pitié-Salpêtrière Hospital, but key work by the professor was postponed until yesterday.

The seven time F1 champion suffered severe head injuries on a family skiing holiday in the French Alps on December 29 2013, and has not been seen in public since.

Schumacher was skiing with his son Mick when he fell and cracked his head on a boulder on the Combe de Saulire above Méribel.

He hit the right side of his head on the rock, splitting open his helmet. Doctors worked frantically to remove blood clots from his brain, but some were left because they were too deeply embedded.

The devastating injury left him paralysed and unable to speak.

Schumacher spent three months in a medically-induced coma after the accident and has had years of intensive care at his house in Gland, a Swiss town on the shore of Lake Geneva.

His condition now appears to have stabilised and in January this year he was taken by helicopter to the family’s holiday home in Mallorca for his 50th birthday.

He said: “I’m always careful with such statements, but it’s true. I saw the race together with Michael Schumacher at his home in Switzerland.”

While declining to provide too much detail on Schumacher’s health, out of respect for his family, Todt said: “Michael is in the best hands and is well looked after in his house.

“He does not give up and keeps fighting.”

Schumacher remains the most successful driver in Formula One history, with a record 91 Grand Prix victories.

In January his family released a statement saying he was in “the very best of hands”.

His son, Mick, who is now 20, won last year’s European Formula championship with eight victories and has since moved up to Formula Two.

This article originally appeared on The Sun and was reproduced with permission.

Is Hamilton now the GOAT?

CroydonDog said:
Is Hamilton now the GOAT?
Click to expand...

No, but that car is.

Danny Ric, McLaren and Merc Engines.....2021 looks like being an awesome year for F1.

Vettel at Astin Martin, Perez at Redbull, Sainz at Ferrari, Alonzo at Renault and a Schumacher on the grid again. I have a small chubby in anticipation.....

Bazildog said:
Danny Ric, McLaren and Merc Engines.....2021 looks like being an awesome year for F1.

Vettel at Astin Martin, Perez at Redbull, Sainz at Ferrari, Alonzo at Renault and a Schumacher on the grid again. I have a small chubby in anticipation.....
Click to expand...

Yeah mate the changes are exciting but unfortunately I think this year we're going to get the same old boring result as we usually do...another Hamilton title. Verstappen and Lecelerc are handicapped with slow cars and the only other driver who has the speed to beat Hamilton is his mentally weak teammate but that's never going to happen.

Can't wait for 22....we get new rule changes in F1 which should hopefully shake up the sport and of course we'll finally get Burton and JAC. Bring it on
You must log in or register to reply here.
Share:
Twitter Reddit Pinterest Tumblr WhatsApp Email Link
Top