KLil said:
Bloke is still risky in my opinion... Yes he had a good season last yr but the season before he was 2 head knocks away from retiring early. Personally wouldnt bank on him.
Click to expand...

I wouldn't either but they made him captain it would be pr exercise to make sure they resigned him as their fans.

They will blow their cap resigning players and will fall apart.

I personally think last year was fluke and they will been maybe bottom of the top eight 2021 and later will out be out.

hayes said:
I wouldn't either but they made him captain it would be pr exercise to make sure they resigned him as their fans.

They will blow their cap resigning players and will fall apart.

I personally think last year was fluke and they will been maybe bottom of the top eight 2021 and later will out be out.
Click to expand...

I actually think there squad is still as good as last yr.. plenty of strike across the park. Maybe it as a fluke and it might be a Bulldogs 2012 V2 but would be surprised if they aren't there abouts again n 21.

Natboy said:
I know but he’s not throwing the toys out of the cot yet
Click to expand...

No idea if legitimate or not

CaptainJackson said:
Facebook rumours that burton close to being released

No idea if legitimate or not
Click to expand...

Fine lewis in the halves it is for you then

CaptainJackson said:
Facebook rumours that burton close to being released

No idea if legitimate or not
Click to expand...

That’s just a post that was ripped straight from here. Those pages just scroll here and pinch shit.

Was on Bulldogs 4 Life the daily telegraph of the bulldogs pages.

Lol exactly. On FB Lewis is the second coming of Jesus Christ hahaha

The Fox sports article eludes to nothing of Burton getting a release early. This Bulldogs "fan page" is just making up shit for clickbait.

Staines was an overnight sensation after scoring four tries on debut in Round 9 last season. The club knew exactly what they had found and ultimately made a decision that he was the future.

Veteran winger Josh Mansour was informed that he’d likely lose his spot on the wing to Staines in 2021 and Mansour ultimately signed with the Rabbitohs.

Three months on from when Cleary informed Mansour that the club would be backing Staines, the Panthers coach is still just as confident that the 20-year-old Forbes product has a big future at the club.

“We’d like to think he’ll be a starter and if he continues to improve and work hard there’s certainly an opportunity for him,” Cleary told Foxsports.com.au

“He’s still a very young man and he had a couple of soft tissues last year in his first year of first grade so that can be a bit of a shock to the system.

“He’s working away and we have big plans for him. Hopefully he has a good year, he’s just doing the work at the moment so taking it day by day.

“But we definitely have some guys in and around that positions, as it is with all our positions, that if someone is not quite on top of things or gets injured here or there we certainly can fill those spots.”

While it was expected Staines would take Mansour’s place on the left wing, five-eighth Jarome Luai dropped a hint that it would be Brian To’o moving from the right to fill Mansour’s void on the left.

Luai posted a photo on Instagram with himself, Viliame Kikau, Stephen Crichton and a new face to the dangerous left-edge combination — To’o. He captioned the photo ‘left side/strong side.’

Cleary said “it could be” when asked if we can take that as a hint but kept coy as he shared that To’o had been training on both sides and “maybe (Luai) is trying to tell me something.”

There’s a spot in the forward pack and a spot on the bench up for grabs with the departure of James Tamou and Zane Tetevano but other than that Cleary says we can expect a Panthers team similar to last year’s minor premiership-winning side.

Having returned to pre-season training in the new year, the Panthers have a much shorter time than previous years to prepare for Round 1.

“It was really crucial that the boys came back in good shape so we didn’t have to waste too much time getting them into decent shape and could train effectively,” Cleary said.

“To their credit, they all did that and we’re just not trying to waste a minute really.”

And they haven’t wasted any time. The squad spent last week at a sport and recreational centre in Broken Bay on the Central Coast.

It’s not the first time the Panthers have taken the squad away on a training camp. The 2020 team participated in a brutal army camp around the this time last year and many of them went on to credit that experience as a factor in last season’s 17-match winning streak.

Cleary agrees that the success of army camp is what drove the idea of last week’s getaway.

“We felt like we got a lot of value out of last year (army camp) so we thought we wanted to follow up on a few things we learnt there... it was a little bit of a tough decision because of the shorter pre-season but having done it now, we’re really happy with how it went.”

It wasn’t an army camp but the players were still physically challenged. Australian boxer Bilal Akkaway joined the boys and put them through their paces.

“It was just another way to keep them off their legs. We’re just trying to get as much into them as we can,” Cleary said about the boxing training.

As for any future boxing stars Cleary laughed and said “not really.” 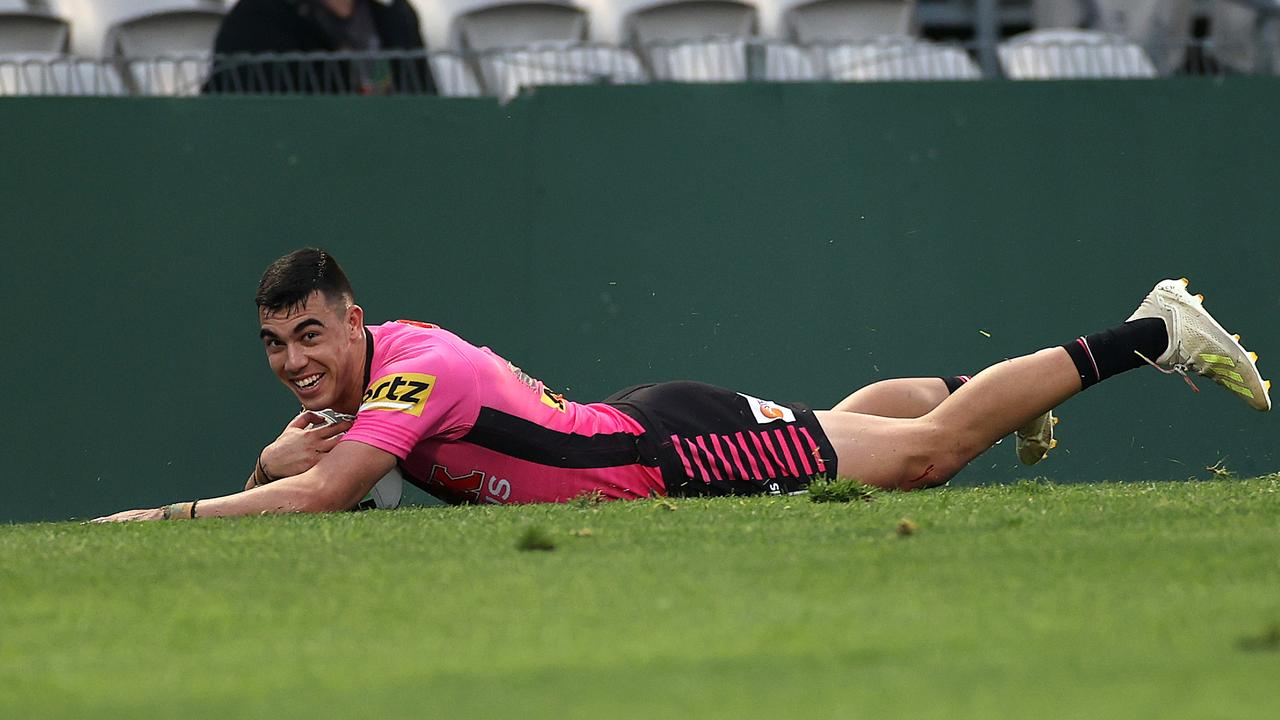 <b></b>Panthers coach Ivan Cleary has revealed his big hopes for young gun Charlie Staines and hinted there could be a switch-up to his lethal backline.
www.foxsports.com.au

Whoever is making this up should at least make it look professional or read what’s typed, what’s written doesn’t make any sense.

FMD bookface why would ya.....

Leaving it late now if Penrith will release Burton.

I just get the feeling that if Burton does come in 21 it will be a deal of some sort with a player swap Penrith needs prior to June 30, and depending on how Penrith are travelling..

Piece in the telegraph today (just read it at a cafe). Similiar to the Baz article earlier this week - this time for Clearly.

If it is anything to go by, Cleary is of the opinion that Burton is part of his plans for 2021, and that thought has never waivered.