The Football Thread (For all Football/Soccer talk)

Glasshouses and stones, with you liverpool blokes laying the slipper into city
I wasnr laying into city, you liverpool supporters were, hence my post reminding you

And got every other club kicked out
Has city got anyone else banned?
United?
Spurs?
No just your grubby lot
Don’t defend the scum or change the subject or point fingers
What you mob done was sheer filth, and an embarrassment to the sport

Ah, OK. That's the point you were trying to mate about gladd houses etc.

peronally find it pretty pathetic that a Liverpool supporter can't have a view on City getting banned because of financial doping because of what some of our supporters did 30+ years ago ... two seperate things and reasons for getting banned ... but I guess that's just a part of supporters these days.

Get what you're saying about Liverpool and what happened at Heysel. Horrible what happened, and at no time did I or will I ever try to excuse anyone of responsibility for the death of innocent supporters. No person should ever ever go to watch a game of football and not come home. No one is defending anyone. Not changing the subject. Nor pointing fingers ...

Liverpool were wrong and every time I hear or read about Heysel it just send shudders through me. No football fan should go to a football game but not come home. Whatever the circumstances Liverpool needs to take responsibilty for our actions, which we did ... a little too late though!

In saying that you seem to be mostly upset that the rest of the league got punished because of Liverpool and what they did. "And got every other club kicked out"

Honestly, back in the day I'd have felt the same in my blind support of Liverpool and if the situations were reversed I'd have hated you all the more. But I grew up and learnt to read, research and understand reasons behind such things as bans. If you honestly think that English football teams got banned for 5 years only because of Liverpool supporters it just shows you've got no idea about the topic. Sorry mate, but it clearly demonstrates that your hatred of Liverpool is more important than facts. Be angry for Liverpool fans killing people. But the blame on the English ban goes to all of the clubs our horrible acts just gave the authorities the reason to do what they should've done earlier.

Your comments about murders. I get it. I do. Doesn't make it appropriate to sing at every game we play against each other. Or in general if I'm honest. But I get it. In saying that, it doesn't make it right. Nor does singing about Hillsborough. Using death to score points against your rivals is a grubby thing to do whichever way you put it. Sorry. I say the same about Liverpool supporters saying shit about Munich btw. Primitive thinking but it's at every club.

For the record. Liverpool dealt with Heysel very badly, and I think this is partly to do with the nation's hatred of liverpool for it. From memory someone at our club blamed Chelsea at the beginning rather than taking responsibility. We didn't apologise or take responsibility soon enough. Shit reaction. Club should've done more before the game also, as should've the authorities. As it was clear something was going to happen after what happened a year before in Roma. Liverpool fans were after revenge, and the policing and stadium should've reflected that. They didn't.

At the end of the day no football supporter should go to a game and not come home. What we did is something all Liverpool supporters have to live with the rest of our lives and I'd say a vast majority of us understand that we were the ones who need to take responsibility for what happened.

Sorry mate. Not trying to make this personal, and was hoping to have this convo in private but you brough it out here.

liverpool fans just don't get it.

during the 2005 rematch liverpool fans were booing the memorial and minutes silence ( scumbags ),
The below is a sign which juve fans held up
the rest if the sign said Easy to speak, difficult to pardon: Murders and 15-4-89. Sheffield. God exists 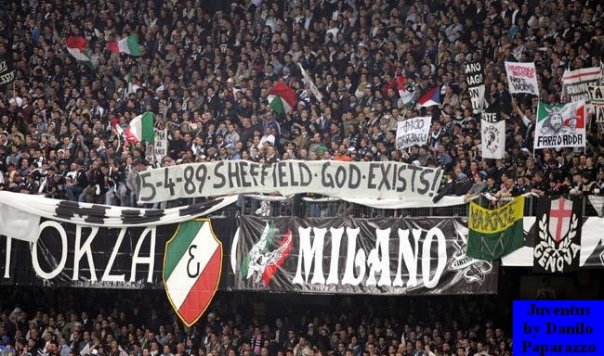 during the 2005 rematch liverpool fans were booing the memorial and minutes silence ( scumbags ),
The below is a sign which juve fans held up
the rest if the sign said Easy to speak, difficult to pardon: Murders and 15-4-89. Sheffield. God exists

Juve fans well justified to hold such banners up and not forgive Liverpool fans. As I said, apologies and acceptance of responsibility came way too late from us. Hillsborough is talked about constantly, but Heysel is hush hush and this is wrong.

However, again you're showing how supporters twist events to suit their own agenda. You're misrepresenting events to support your views which is plain wrong. You dont need to when talking about Heysel, but for some reason you feel obliged to. Shame.

Understand them for doing that and don't blame them at all. But what you're saying doesn't actually follow the truth. No doubt Liverpool supporters were scum for what happened at Heysel. Focus on that instead of making shit up

Slovenia Steve said:
However, again you're showing how supporters twist events to suit their own agenda. You're misrepresenting events to support your views which is plain wrong. You dont need to when talking about Heysel, but for some reason you feel obliged to. Shame.
Click to expand...

you realise i go for man u dont you and im just stiring the pot
Click to expand...

Honestly man, just don't see how u can think it's funny or appropriate to make up shit about dead people or stir about such topics. Real gutter

Really expected more from Bulldog fans considering how much shit we have got thrown away about being rapists, terrorists etc.

Grow the fuck up

UEFA has postponed Euro 2020 until the summer of 2021 to allow European leagues more time to complete their seasons amid the coronavirus pandemic.

The greatest comeback ever - we'll never see something like this happen again in our lifetime. I remember I was in the office that morning following the game closely on Livescore. When PSG scored that goal and were up 5-3 on aggregate, that was it, I stopped. For the sake of it I just thought I'd go back on after about an hour to see what the final score was. I nearly fell over!

Premier League will restart on June 17 with Aston Villa at home to Sheffield United and Manchester City hosting Arsenal.

These are the catchup games. After these 2 games every team would've played 29 games.

PSG should make it to the final .

Safe to say Barcelona's days of being a European Powerhouse are well and truly behind them. Loosing 4-1 to PSG at home is worse than loosing 4-0 away from home. The chances of them coming from behind against PSG (when down 0-4 after 1st leg) repeating what they did 4 years ago are almost non existent.

Wahesh said:
Safe to say Barcelona's days of being a European Powerhouse are well and truly behind them. Loosing 4-1 to PSG at home is worse than loosing 4-0 away from home. The chances of them coming from behind against PSG (when down 0-4 after 1st leg) repeating what they did 4 years ago are almost non existent.
Click to expand...

Mbappe mate. This kid is an absolute freak.

But yes, Barcelona are done and dusted. There is a true changing of the guard happening here. They have some terrific young talent who are playing big minutes this year (De Jong, Dest, Dembele, Pedri, Trincao). They will come good. Real Madrid are in a similar place at the moment too.

Have been a fan of Koeman since his Southampton days, but I think he is regretting one big decision to start off his tenure @ Barca - Suarez is well and truly showing him what he could of offered his team - he's now the leading goal scorer in La Liga for a team that will more than likely win LL this year. But also to be fair to him it was very much a poison chalice gig. When you have fading talents like Messi, Griezaman, Pique, Alba, Biscuits still part of your core team and your in that change over period, any coach will struggle. Factor in boardroom squabbles, a new hierarchy about to be put in place...
You must log in or register to reply here.
Share:
Twitter Reddit Pinterest Tumblr WhatsApp Email Link
Top