alchemist said:
with a team put together from the remnants of 2-3 disbanded clubs and a couple free agents... must be remembered that the first Storm teams in the late 90's had the likes of Glenn Lazarus, Brett Kimmorley, Scott Hill, Robbie Ross, Mark Geyer, Tawera Nikau, Rodney Howe, Stephen Kearney, Richard Swain etc.

I am a fan of Chris Anderson but he had help in Melbourne
Click to expand...

he got the remnants all right, 34 year old lazarus was on his last legs and is not the real lazarus, kimmorley had 16 games in his career

make no mistake that chris anderson winning 2 different titles on 2 different teams in the 90's is complete validation and he is unlucky that gould came in and ripped apart all his hard work building the team, signing away dymock, jason smith, pay and others for 1996

Grechy21 said:
Out of curiosity, what car did he buy?
Click to expand...

I'll take a guess and say a good quality mid-range car that ticks the 'value for money' box.

Spoonman84 said:
If you hate it or love it I’m just glad the board and admin have put their balls on the line and made a call. At least we aren’t sitting back accepting the situation where we are and have done something about it.
Click to expand...

I think the large majority are on board though mate, always a few negatories that hold grudges or see things that aren't really there.

I hear Phil's a big fan of cheese.

Rodzilla said:
anderson leads 2-1 in premierships over gould since the club made the decision to replace gould with anderson, so the first thing i expect gould to say is that the club was correct to get rid of him as coach
Click to expand...

So many pluses for phil being on board. Now im looking forward to our future. Massive shot in the arm to our club.
Kudos to the board etc.

Spoonman84 said:
If you hate it or love it I’m just glad the board and admin have put their balls on the line and made a call. At least we aren’t sitting back accepting the situation where we are and have done something about it.
Click to expand...

Best signing in years! In fact I’ve been wishing for the club to get him back on board with us for many many years and finally they have done it. This bloke knows exactly what needs to be done on all levels associated with having a successful footy team, present and future, and arguably has more commercial connections than anyone in the game. It’s a win win no brainer having him with us.Yes Gould is a divisive character, however I do not believe his involvement will end the way it did in Penrith because Gould treats Barrett like a son and vice versa so I don’t think there will be any problems like there was with Cleary simply due to Barrett isn’t as arrogant as Ivan is. The pro’s far outweigh the cons with this deal. Welcome back Gus!

That said, he's in a position where he could actually have an impact. Changing coaches hasn't helped, changing the board hasn't helped, hopefully this will help.

I'm guessing we're going to lose the next two games so... Should we get the "Sack Gould" threads started yet?

Rodzilla said:
he got the remnants all right, 34 year old lazarus was on his last legs and is not the real lazarus, kimmorley had 16 games in his career

make no mistake that chris anderson winning 2 different titles on 2 different teams in the 90's is complete validation and he is unlucky that gould came in and ripped apart all his hard work building the team, signing away dymock, jason smith, pay and others for 1996
Click to expand...

Kimmorley was a Newcastle junior and 2 years younger than Andrew Johns... hence, only 6 FG games for the Knights in 2 seasons and then moving to the Hunter Mariners and then the Storm... and he was a Test player by 1999 and playing Origin by 2000

Why do I feel like you are lying haha

And let the clean out / rebuild begin .

Here he is. What's the scoop Master p

That said, he's in a position where he could actually have an impact. Changing coaches hasn't helped, changing the board hasn't helped, hopefully this will help.
Click to expand...

The thing is Gould also bring business. His contacts list and the resources up his sleeve are second to none. It was Phil Gould that saved Penrith when they were in financial ruin and on the verge of collapse when he made one phone call to James Packers who kindly parted with near $10 mill to assist Gould in resurrecting the Panthers football club and team. That’s just one fine example of what Gould can do ..

Hopefully Gould creates a Sports High School to match Holy Cross Ryde , Blacktown, Westfield and Endeavour. Bring the kids in early teach the Bulldogs culture and how to be good people. Employ a teacher/ coach to bring the kids through the school rugby league Harold Matt’s and SG Ball together.

Gould has an incredible history in the game at all levels - as a player, coach, manager and commentator. Moreover, he has a deep understanding and respect for the Bulldogs Club and it’s history.

Having played in 40 First Grade games for the Bulldogs between 1983 and 1985, Gould then coached the Bulldogs to the 1988 Premiership to give the club its sixth out of eight titles.

From there Gould went on to further Premiership success with the Panthers in 1991, before a stunning coaching career with the New South Wales State of Origin side, where he coached the State to four series wins in five seasons between 1992 and 1996, before returning in 2002 to coach the team for three more series, winning two and drawing a third, to make him the most successful New South Wales Coach in history.

Bulldogs Chair John Khoury was delighted that he had been able to bring Gould back to Belmore:

"Phil Gould’s return to our club as GM of Football is phenomenal news for our club, it’s Members, fans and stakeholders.


He was already part of an amazing run of success that the club had during the eighties and his influence during his time here is something that our fans will always be grateful for.

Phil has a great relationship with Head Coach Trent Barrett and we firmly believe that he can help to drive us forward to getting back to where we need to be: namely as a Premiership contender once again.


Bulldogs Chairman Update: John Khoury
A great deal of work went into ensuring we recruited the right person for the Football Manager role and I am delighted that the club will get to benefit from Phil's knowledge and track record of success, as we look to the future."

Phil Gould was also pleased at the chance to work with the Bulldogs:

"My sincere appreciation and thanks to the Canterbury Bulldogs Chairman John Khoury and his Board, for their confidence in appointing me to this very important position.

It’s a wonderful opportunity, with a great club.


I played with the Bulldogs. This club gifted me my first ever coaching appointment back in 1986. To be returning to the Bulldogs many years later, in this role, is truly exciting.

I look forward to rekindling old friendships, making new friendships, and enjoying the club’s journey back to the top of the National Rugby League”. 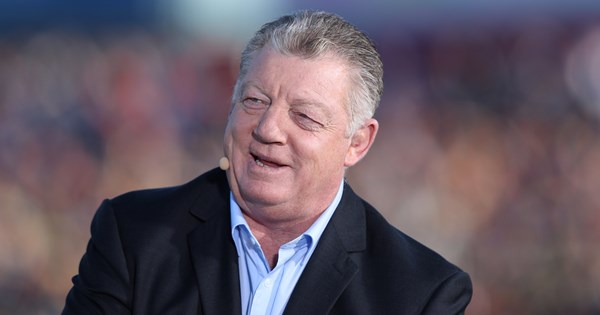 Phil Gould to be the Bulldogs' new General Manager of Football

The Canterbury-Bankstown Bulldogs have continued to put important pieces in place to build for the future with the appointment of one of the smartest minds in the game in Phil Gould, as their new General Manager of Football.

So let me get this straight. Gould said that Barrett shouldn't have taken at the Bulldogs & takes the GM of Football at the Bulldogs himself. I guess money changed his mind.

Actually I don't care, we need him desperately.