Roosters are reportedly offering Mitchell 800K a season to re-sign. IF true we got no hope unless we're prepared to offer at least a MIL. I was really confident of getting him a few weeks ago but from other stories I've read today (disagreement by board members, board members trying to save 100K) I'm really concerned the board are going to stuff it up

Chooks ready to talk turkey with Mitchell but is $800K enough?
Roosters management are aiming to bring Latrell Mitchell’s contract matter to a head this week. There is likely to be a high-level meeting to sort through what is becoming a messy saga. If you listen to those close to Mitchell, he is said to be insulted by the offer of $800,000 a year from the Roosters and is seriously considering moving on.

He has won two NRL premierships and played for his state and country. He is now aiming to look after his family, and money is a bigger factor than ever as he is already a dad and has another child on the way.


His first choice if exiting would have been Newcastle – the club nearest to his home town of Taree. Without an offer from the Knights, the Bulldogs may be an option. 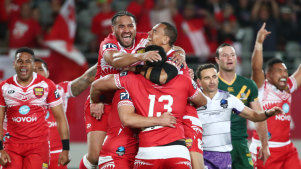 TONGA 16 AUSTRALIA 12
IRL
Tonga stun Australia in one of the greatest upsets in Test history
The Roosters have heard talk of his dissatisfaction. Mitchell is said to have his nose out of joint that he didn’t receive the praise that James Tedesco and Luke Keary received after the grand final, and it’s something that coach Trent Robinson will have to deal with when he meets with him this week.

The $800,000 is as far as Roosters are willing to go and they are comfortable with their support of Mitchell over his time at the club. But the Bulldogs are prepared to offer the star centre more than $1million a season. The Bulldogs say they won’t go near $1.4m, as has been suggested. Meanwhile, the situation surrounding Mitchell remains hectic. He has a new manager, Wade Rushton, but those close to him are urging him to use Mario Tartek.

Canterbury Leagues club board member George Khoury met with Mitchell and that’s where he started to consider the big money elsewhere. Khoury was chastised by the Dogs for the meeting.

Hahahahahaha.... it’s over, uncle Nick you’ve done it again! He we are thinking we have a chance! This corrupt competition is becoming more and more unwatchable!

Dogzof95 said:
Hahahahahaha.... it’s over, uncle Nick you’ve done it again! He we are thinking we have a chance! This corrupt competition is becoming more and more unwatchable!
Click to expand...

Was always a long shot, he has shit sewn up.. if he wasn’t at the roosters they wouldn’t be rorters as bad as they are now an would be on the bottom of the table..!! Corrupt mother Fuc*er

Of course the Roosters have a spare 800k after upgrading Manu. Plus they'll still have space to upgrade Butcher, Verrilis etc and probably sign Fifita along the way. And no one in the media or NRL will question any of it.

TBH he was pretty ordinary last night in the Test. Even Johns/Fittler were putting the boot in, about showing up, getting stuck into hard yards and not taking the easy options. They didn't name names at first then at the end of it let it slip that it was Mitchell and a few others.

This is a tough question on this bloke. His involvement during games is just bog average, then he will turn up and create a try....then go back to sleep for another 30 minutes! All this and we will have to pay near a mil to get him, fuk I wish there were some other marquee guys around. If we did sign him you would have to put in FB (against my love of DWZ) just so he's in a position that he can't be lazy at and stay involved in the game.
B

Meh!!! like I was saying the kids got potential and can be the best player in the game but just plays half ass .
J

After yesterday’s game uncle Nik can have him!!
N

He ain't worth it
B

I reckon we should put a cap on 1M per season offer. That's a fair offer. Not 900K, not 1.1M. If he takes 1MIL then good if not then obviously the Roosters are pulling sh.t, we can't compete and he aint worth more.

bradtalo said:
I reckon we should put a cap on 1M per season offer. That's a fair offer. Not 900K, not 1.1M. If he takes 1MIL then good if not then obviously the Roosters are pulling sh.t, we can't compete and he aint worth more.
Click to expand...

Agree. If we offer him $5million over 5 years and the Cocks are offering $800K per year, that means he would potentially earn an extra $1million with us over the samr period. If he doesn't want to take that, see ya!!

we never get marque players

doggieaaron said:
Weezel saying we are offering him over a mill surely not $1 mill tops
Click to expand...

Wouldn't believe shit that comes out of his mouth.
M

bradtalo said:
I reckon we should put a cap on 1M per season offer. That's a fair offer. Not 900K, not 1.1M. If he takes 1MIL then good if not then obviously the Roosters are pulling sh.t, we can't compete and he aint worth more.
Click to expand...

If he didn't go missing in games and continually played to his potential, he would be worth $1m plus, but his attitude reduces his value to about $6K and no more in my opinion.
Whats the bet that Uncle Nick who is never going to do us any favors is trying to get us to pay overs, knowing that his attitude is going to get worse as he gets older. I just hope that our board walks away from him ASAP.

We've been blown out of the water by Uncle Nick. There is no way we can match his brown paper bags offer. On top of that if he signs with us Fittler will not select him in Origin
You must log in or register to reply here.
Share:
Twitter Reddit Pinterest Tumblr WhatsApp Email Link
Top