Reynolds’ manager, Erik Kritzer, confirmed the star’s death to The Hollywood Reporter, saying he passed away this morning at Jupiter Medical in Florida from a reported heart attack.

The actor, who has nearly 200 film and TV credits, also starred in multiple successful films including 1974’s The Longest Yard, 1977’s Smokey And The Bandit, 1996’s Striptease and 1997’s Boogie Nights, the latter of which earned him an Oscar nomination.

Reynolds spent nearly five years as the No 1 box office attraction in America in the 1970s.

While he was known for many big roles he is almost as well-known for the role he turned down, including Harrison Ford’s Star Wars role of Hans Solo, Richard Gere’s role in Pretty Woman, James Bond in the 007 movies, Bruce Willis’ role in Die Hard, and Jack Nicholson’s roles in both Terms of Endearment and One Flew Over The Cuckoo’s Nest.

Reynolds had been battling health issues in recent years. In 2013, Reynolds’ manager said he was in intensive care in a Florida hospital for treatment of flu symptoms, including dehydration.

In 2010, he reportedly had a “planned” heart bypass operation, with his rep denying reports he’d been rushed to the hospital.

His family released a statement saying his death was a shock.

“My uncle was not just a movie icon; he was a generous, passionate and sensitive man who was dedicated to his family, friends, fans and acting students,” his niece, Nancy Lee Hess said in a statement. “He has had health issues, however, this was totally unexpected. He was tough. Anyone who breaks their tailbone on a river and finishes the movie is tough. And that’s who he was. My uncle was looking forward to working with Quentin Tarantino (in Once Upon A Time In Hollywood) and the amazing cast that was assembled."

Reynolds was a former university football player who took up acting after an injury cut short his playing career, reports the New York Post.

Reynolds spent a decade taking on bit roles in Hollywood before breaking through with roles in some of the biggest films of the decade, including Deliverance,The Longest Yard and — the movie he’s best known for — Smokey And The Bandit.

Burt Reynolds said Sally Field was the love of his life. Picture: Supplied

Reynolds was born in Lansing, Michigan, on February 11, 1936. His family settled in Riviera Beach, Florida, after his father, who served in the Army, returned from Europe in 1946. A star football player in high school, Reynolds attended Florida State University on a sports scholarship.

Although he intended to go professional, his career was cut short by a series of injuries. Reynolds briefly contemplated a career in the police force, but a teacher recognised his talent while reading Shakespeare in English class and pushed him toward acting.

He began appearing on television in the late 1950s, but it wasn’t until 1962 that he secured a consistent role as the half-Native American blacksmith Quint Asper on Gunsmoke.

A decade later, he had his big-screen breakthrough in Deliverance, John Boorman’s psychological thriller about four friends whose rafting trip in rural takes a terrifying turn. Reynolds said he considered the Oscar-nominated film, which co-starred Jon Voight, Ned Beatty and Ronny Cox, the best of his career.

Reynolds, whose career ultimately spanned six decades, continued to act regularly, notably starring in the Cannonball Run franchise in the ’80s and the sitcom Evening Shade in the early ’90s, for which he won an Emmy and a Golden Globe.

An action star who did many of his own stunts, Reynolds was also a charismatic rogue and relentless flirt on-screen, helping to make one of the biggest sex symbols of his time.

As did his infamous appearance in the nude as a Cosmopolitan centrefold in April 1972.

The actor was as much of a ladies’ man off-screen, and was married twice, to Judy Carne from 1963 to 1965 and to Loni Anderson from 1988 to 1993. Despite those two trips down the aisle, the love of Reynolds’ life appeared to be his Smokey And The Bandit co-star Field, who he famously described as “the one who got away”.

As recently as July, there were reports Reynolds was hoping to reconnect with Field with whom he was estranged.

Field, however, gave a touching tribute to her ex-love.

“There are times in your life that are so indelible, they never fade away. They stay alive, even forty years later. My years with Burt never leave my mind. He will be in my history and my heart, for as long as I live. Rest, Buddy,” she said.

In more recent years, the actor had battled a number of health issues.

No matter the role, Reynolds always tended to play loveable rascals, something he knew audiences expected of him. “We’re only here for a little while, and you’ve got to have some fun, right?,” he told The New York Times in early 2018.

“I don’t take myself seriously, and I think the ones that do, there’s some sickness with people like that.”

In 2017, Reynolds received critical acclaim for his final performance in the indie movie The Last Movie Star.

what an icon. R.I.P Burt and thanks for the years of entertainment

Sad day for the entertainment industry. I loved the guy and his accent was awesome. I nearly fell off my chair when I was playing Saints Row the 3rd and he made a cameo appearance.

RIP he was a cool cat.

RIP. He was always such a legend. Time to keep an eye on Dolly Parton. With Burt gone she can't be far behind.

I liked Burt and his laugh that he had. I loved Smokey and the Bandit 1 & 2, along with the likes of Cannonball Run, Stroker Ace, Deliverance, The Longest Yard. I think one of his best performances was in Boggie Nights. 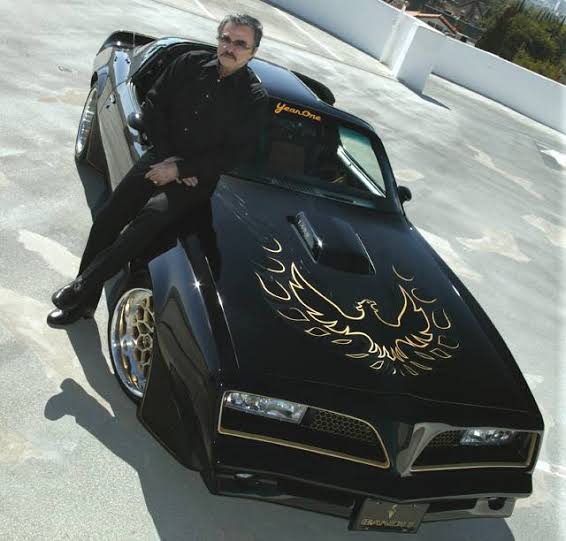 He was a great actor but his roles got reduced significantly in the 90’s because he developed a bad attitude.

That’s why he had no choice and had to be the star of cop and a half lol.

Hacky McAxe said:
RIP. He was always such a legend. Time to keep an eye on Dolly Parton. With Burt gone she can't be far behind.
Click to expand...

Wish I had that car in my garage. Always wanted one because of Smokey and the Bandit. I just thought they were a cool looking car for their time.

MatstaDogg said:
Wish I had that car in my garage. Always wanted one because of Smokey and the Bandit. I just thought they were a cool looking car for their time.
Click to expand...

It's a nice modern take on the oldie. Looks tough. I want both now haha. But I still love the original.

East bound and down, loaded up and truckin',
We're gonna do what they say can't be done.
We've got a long way to go and a short time to get there.
I'm east bound, just watch ol' "Bandit" run.

And yet, Madonna is still alive. Bitch must be in her 90s.

K E said:
And yet, Madonna is still alive. Bitch must be in her 90s.
Click to expand...