Back in the game: How Steve Waugh lured Todd Greenberg to cricket

Back in the game: How Steve Waugh lured Todd Greenberg to cricket

Todd Greenberg jokes to people that he’s played just about every golf course in Sydney in the nine months since his departure as chief executive of the National Rugby League.

Certainly, he’s been very much a regular at his local public links Hurstville Golf Course - or Royal Hurstville as it’s affectionately known in those parts - while he has sat on the sidelines of sports administration. 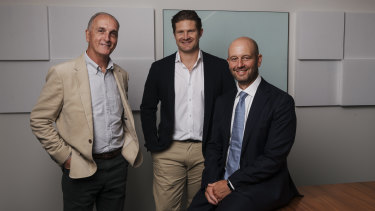 For the past few months, though, Greenberg has also been busy picking the brains of players past and present from his first love as a sport - cricket - as he weighed up a tilt at the vacant CEO’s job at the Australian Cricketers Association.

Greenberg spoke initially with the Swiss Army knife of cricket officials, Neil Maxwell, the former NSW and Victoria all-rounder who has been a player agent for the likes of Brett Lee, Mike Hussey and Josh Hazlewood and now occupies a seat on the boards of the players union and Cricket NSW.

Then in December he was spotted having coffee in Sydney’s eastern suburbs with Australian fast bowler Pat Cummins, the Test vice-captain and an ACA director who was on a brief break from the national team’s biosecurity bubble during the limited-overs games against India.

For Greenberg the clincher, however, were two face-to-face meetings with former Test captain Steve Waugh. The two have known each other for years, first crossing paths when Greenberg was a first-grader for Randwick Petersham and, in the days when internationals still turned out occasionally for their club teams, Waugh was playing for Bankstown.

They got to know each other further during Greenberg’s time at the Canterbury Bulldogs. The then CEO even enlisted Waugh, a diehard Bulldogs supporter, to help him persuade Sonny Bill Williams to stay before he walked out on the club for French rugby in 2008.

Waugh, who was a senior Australian player when the ACA was established in 1997, holds no formal title now in Australian cricket but remains an influential figure.

While he couldn’t get SBW over the line, he convinced Greenberg to be the vocal, well-connected and commercially savvy advocate they were searching for.

After 13 years in the headlights as Canterbury chief, NRL head of football and then CEO of that code itself, he will now spend his time representing the interests of national cricket captains Tim Paine and Meg Lanning all below them after being announced as the new ACA chief on Monday.

It’s a position of less profile and considerably less pay than $1 million plus he was on at the height of his career in rugby league. 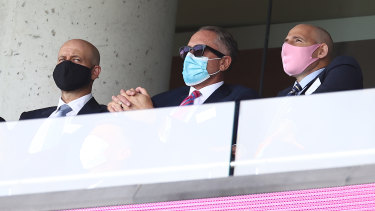 But it is a chance to stamp his name on a sport in which he represented Australia at the Maccabiah Games.

Ironically, Greenberg was often criticised in his former working life for being too close to the players. He was hammered when the NRL gifted Cameron Smith’s wife, Barb, an expensive ring on the occasion of Smith’s 400th NRL game and attracted scrutiny for communicating personally with the likes of Sam Burgess when they ran into trouble.

That closeness, though, obviously enhanced his appeal to Australia’s cricketers.

“There is not doubt that Todd is very much a players’ leader,” said former Australian all-rounder and players’ association president Shane Watson, who spoke to players about Greenberg before the appointment was confirmed on Monday. “We feel incredibly lucky to have Todd leading our organisation.“

Greenberg comes on board with the players having had an often toxic relationship with Cricket Australia in recent years, never worse than when they were locked out during an industrial crisis in 2017.

The deal that was eventually struck then, allowing the players to keep a share of the game’s revenue, runs out at the end of next year.

Greenberg, who is no stranger to pay disputes with players from his time at the NRL, could find himself in another one, this time on the opposite side of the table to a governing body.

Rather than thinking about the next pay agreement for the game, however, he is more intent on continuing to rebuild the bridges that were torn down last time around.

An excellent communicator with direct lines to prime ministers and premiers and inside knowledge of broadcast deals and sport’s commercial arena, Greenberg had appeared a probable candidate to be the CEO of Cricket Australia itself following the exit of Kevin Roberts last year.

But with CA’s interim chief Nick Hockley likely to retain the job after managing the game during the COVID-19 crisis, he has found another avenue into the sport.

Whether or not Greenberg ends up with a shot at running cricket down the track depends on how the next few years pan out. But he is back in the game.

I guess he finally landed his dream job..

Did Todd Greenberg write this story? It is sickenly cringeworthy. He is no better than Sonny Bill, took the $ and shot through. Another recycled CEO, are these people ever held accountable?

I don't know how far I got into this article before I came to the conclusion that I couldn't give less shits.