Tough to watch Chase Stanley in tears in the sheds. The poor bloke has had so much bad luck!

CHASE Stanley has had one of the unluckiest 100-game NRL careers in memory.

It was one of rugby league’s great triumphs when he ran out for the milestone game at Belmore Oval on Monday night and one of its great tragedies that he was unable to finish it.

Stanley was inconsolable in the dressing room at half-time after he was forced from the field with a hamstring injury in the 37th minute and his despair brought out the best in one of his teammates, with David Klemmer captured on camera comforting the injury prone 26-year-old in a warm embrace.

Klemmer is better known for his skull crushing on the field than his tender side off it but his care for his hurting teammate was clear as Stanley wept into the 120kg Origin prop’s chest.

Click on the player at the top of the page to watch the heartbreaking scene!

The scene led to speculation the injury may have been serious enough to end Stanley’s career but that likelihood was tempered by Bulldogs coach Des Hasler who confirmed it was a hamstring injury likely to keep him sidelined for weeks rather than months. 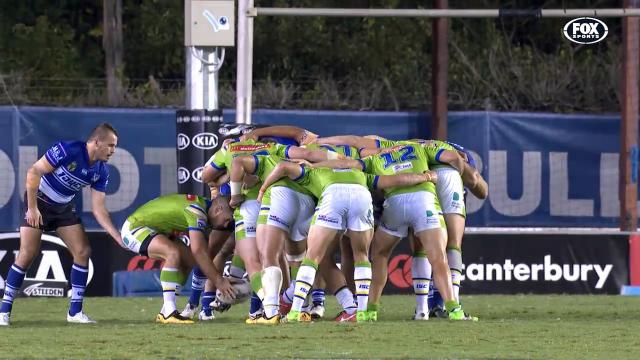 0:29
“He’s done the hamstring, so he’ll have that scanned but it’s not good,” Hasler said in the post-match press conference.

“He’ll miss a couple of weeks.”

Still, the devastating dressing room scene had a huge impact on fans and commentators alike, with social media lighting up in reaction to Stanley’s tears.
B

poor bloke heart breaking wish him all the best he is all heart.

His one of the unlucky players , I feel for him badly , his not even a bad player gosh hope the hamstring is not serious

Poor soul. Has a lot of talent and potential but injured always stuff him up. Thank you chase for your contribution to the dogs and to the NRL.

You have to feel for the guy, he is a good player but his body just keeps letting him down..... good on you Klem for being a good team mate and being there for him.

I feel for him, and I don't want to sound harsh, but is it luck, or is his body more susceptible to injury than most others playing NRL?

His brother retired at the age of 24 due to a persistent knee injury.

Raikkonen said:
I feel for him, and I don't want to sound harsh, but is it luck, or is his body more susceptible to injury than most others playing NRL?

His brother retired at the age of 24 due to a persistent knee injury.
Click to expand...

To be brutally honest, he is not made for contact sport. I don't think he could even handle soccer. Doesn't make him a bad person, but he is costing us games by getting injured early and making an already flawed "game plan" worse.

Des already wastes 2 bench spots on Browne and Elliott. He fucks up the already shit rotation.

They say that footy players are tough and that as such they never show excessive emotion ( as opposed to a competitive reaction). I saw something last night which dispelled that myth.

My heart broke at vision that showed an inconsolable Chase Stanley openly weeping in the dressing sheds at half time, while his team mate David Klemmer held him as his emotion spilled over, as yet another cruel injury this time ended his game against the Raiders.

It has taken him a ten year period to reach the 100 first grade game milestone, but you know what; Chase has NEVER given up on himself and has never given up on his team mates either- if only we could bottle that character and transfer it to a few others. He would have been feeling as if he was letting his team mates down.When he is fit and well he is a valuable member of the side and contributes good defensive input.

One wonders now just when the breaking point will be reached. Another player down for goodness knows how long and a fullback who will sit out games even when fit. Our depth is being sorely tested and the form of those in NSW Cup does not give me a great deal of comfort or faith should we suffer any more backline injuries. Holland will be called up no risk about that; if he does he should be handed the kicking duties because once again last night we saw the folly of having a kicker who is missing goals that he should be converting; 50% kicking success for Moses so far this year.

Lol, are you talking about the Australian Window Association AWA?

ASSASSIN said:
Lol, are you talking about the Australian Window Association AWA?
Click to expand...

Klemmer is such an awesome human.