James Graham slams 'outrage culture' that has crept into NRL

Former Canterbury captain James Graham has slammed the "outrage culture" that had crept into the game after being left stunned by the sensational fallout to the Bulldogs' Mad Monday celebrations.

The NRL hit the Bulldogs with a record $250,000 fine on Thursday before the club fined four players - Adam Elliott, Marcelo Montoya, Asipeli Fine and Zac Woolford - a combined $70,000. 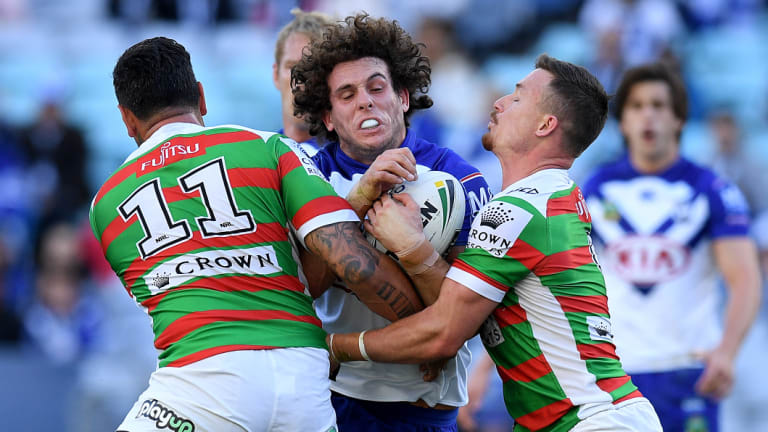 Hit hard: Canterbury's Adam Elliott was fined $25,000 over his conduct on Mad Monday.

Photo: AAP
The sanctions came two days after images of Bulldogs players partying at the Harbour View Hotel in The Rocks were published by News Corp.

Elliott, who was fined $25,000, has found himself at the centre of the controversy after being photographed dancing nude on a table at the pub.

Graham has been taken aback by the firestorm around his former club's Mad Monday festivities and said he had taken time out from St George Illawarra's finals campaign to contact good friend and former teammate Elliott.

"There have been some stories I've read ... it's just so cheap. People need to be careful about what they want and where this sport is going.

"When you talk about having access to players for media and for fans, do you think this will help?"

Graham issued a defence of 23-year-old second-rower Elliott, saying the "past few days don't define who he is".

"He has done so much for the community. He studied for however many years at uni while trying to make it as an NRL player. That's better than what I have done," Graham said.


"The stuff he does for his [autistic] brother, the stuff he does in the greater community .... and the very fact people criticised him by saying he was due to go in for surgery. They don't realise he's been in pain and been putting off that surgery for three months just to get through the season.

"Yet people want to personally attack him for what you could argue was over-indulging. It's also a strange one in terms of why Canterbury's Mad Monday was the only one photographed. There were seven other teams.

"I reckon if you went to every club's Mad Monday you would find something for the outraged mob to be outraged about. Some of the people in the outrage culture don't understand team dynamics and the different people within the team, the personality types and traits, and what makes it click."

NRL chief executive Todd Greenberg said the proposed six-figure penalty reflected the seriousness of the behaviour and the damage which had been caused to the game.

Yet the governing body did nothing to come down on Cronulla pair Josh Dugan and Andrew Fifita a couple of weeks earlier after they embarrassed the game with a foul-mouthed podcast, where they attacked a senior journalist, and Fifita even poked fun at deliberately spilling a row of supporters' beers at a Melbourne game.


Elliott only a couple of weeks ago praised Graham for standing by him when he was trying to break into first grade and recalled how the English prop walked into former coach Des Hasler's office and demanded he play.

While Elliott's nudity in a public bar and the graphic images of players vomiting on the street left the game with a black eye in week one of the semi-finals, Graham pointed out that the Bulldogs were meant to be enjoying a private party.

It has also been suggested it would have been almost impossible to see the players on the third floor of the pub from the street.

"I read an article where a journalist was saying if he had gone in there he'd be intimidated, but he wouldn't have been allowed in. It was a private party,'' Graham said.

"Go somewhere else. If I walked into a pub and it was full of opposing fans from a different club, I'd just walk out, especially if I was getting abuse or felt uneasy. There are plenty of pubs in Sydney."

Watch the triggered hypocritical snowflakes get triggered over the truth.

Man I love Graham. I wish one person within the club stood up for our rights, called it like it is and opposed this absurd fine instead of laying down and doing whatever the NRL says.

The only thing worse than this whole situation being blown out of proportion was the club having zero backbone and not appealing anything through the courts, which I'm sure they'd win if they did.

Bullfrog must be rolling around in his grave. He would have fought this tooth and nail.

Onya Jimmy. About time a player stood up and actually spoke their mind, instead of the mundane PC shit most players are being told to say. Fukken puppets.

And that's why he's a true bulldog not like that fagged Ennis. Love ya jimmy.
W

..this guy should be head of the players association when he retires. Time for the players get some balls and throw down some demands of their own...it seems like a one way street at the moment with a fuck the players attitude within the NRL and the media
B

Firstly what we must do,is stick solid,behind club and players,I have just canceled my daily telegraph digital,will not watch another episode with that dickhead journo,on Fox

Graham saying what our CEO should have said. What a leader.
T

Fuck i miss him. Im sure a lot of players all feel the same

I thought most members hated him after he defended his injured mate from the media?

PS it's ok, he defended a drag queen player lol

Onya Graham. Need more people like him in this world

Wait for the $30k fine for talking shit about the NRL

We do, but pussies these days don't like people that don't follow the heard and speak the truth.

beastwood89 said:
And that's why he's a true bulldog not like that fagged Ennis. Love ya jimmy.
Click to expand...

The real James Graham is back

Wolfmother said:
The real James Graham is back
Click to expand...

Must of stole his balls back off of grimace...

Dingo said:
Graham is the staunchest **** in the game and he utterly hates PC culture.
Click to expand...

Snowflakes call it Politically Correctness, but it really stands for poofter culture. Weak ***** using feelings to dictate their pathetic lives.