So Thompson is available for round 4 if he can’t play this trial?

Wait, so does this count towards Thompson's suspension? Unless he's carrying an injury?

Canterbury’s new era under Trent Barrett will begin with a major overhaul of the team’s spine and a centre aiming to prove his worth in a trial against Cronulla.

The first glimpse of Canterbury’s new era under Trent Barrett will begin with an untried halves pairing, a new fullback and a centre aiming to prove his worth.
In a far from ideal build-up ahead of the season proper for Barrett’s Bulldogs, the new coach has been impacted by injuries before the club’s first and only NRL-standard trial match against Cronulla at Kogarah on Saturday night.

Unavailable for the hitout against the Sharks are Jeremy Marshall-King, who had been training all summer at hooker and Jake Averillo, the club’s first-choice five-eighth. 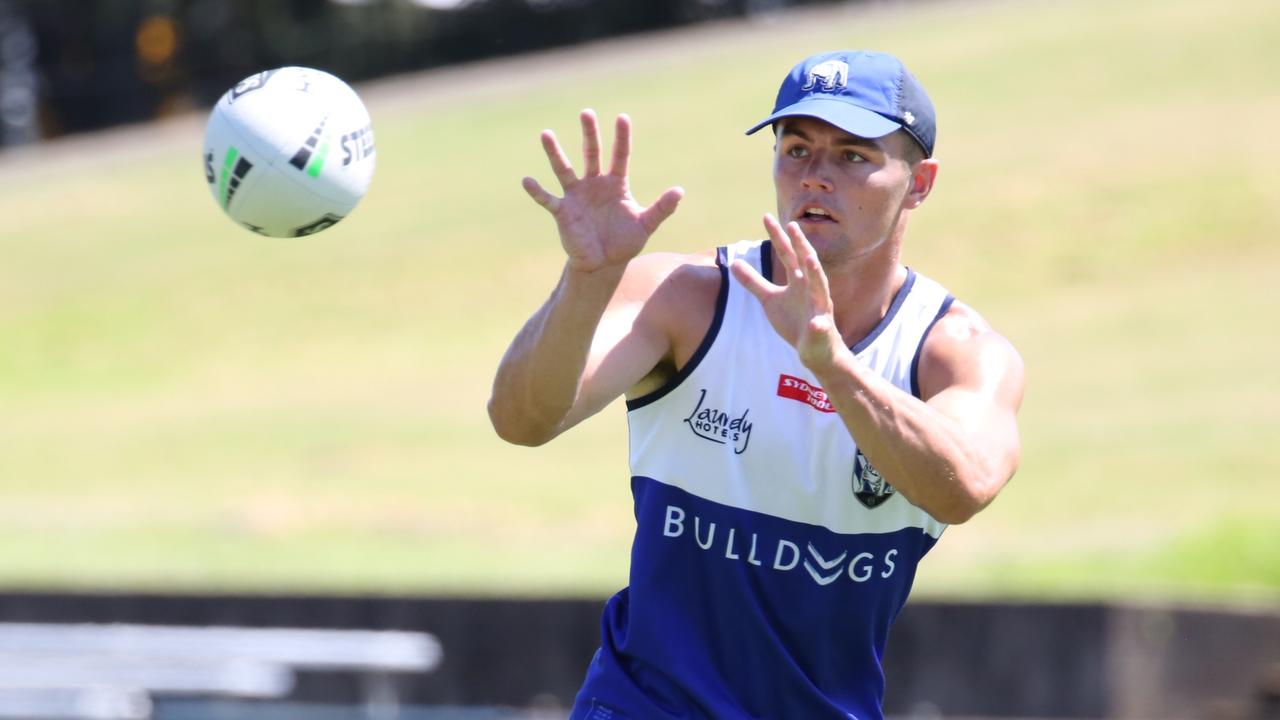 Kyle Flanagan will play his first game for the Bulldogs against Cronulla on Saturday night. Picture: Bulldogs Media

Marshall-King has suffered a minor foot injury and is aiming to be fit for round one, while Averillo won’t trial and is in doubt for the start of the season due to an elbow injury.

The key omission of Averillo from the trial has forced Barrett to name playmaker Kyle Flanagan at halfback in his first game for the club alongside back-up half Brandon Wakeham.

The loss of Averillo is a blow for Barrett who wants to bed down a consistent halves partner for Flanagan in order to give the talented halfback the best platform to lead the Dogs.

“Wakey (Wakeham) will get an opportunity and we’ve got some talented younger players pushing to play behind him also,’’ Barrett said.

Targeted as a high-profile recruit on a three-year deal, Nick Cotric moved to the Bulldogs from Canberra for the opportunity to shift from the wing, where he featured for the Blues, to the centres. 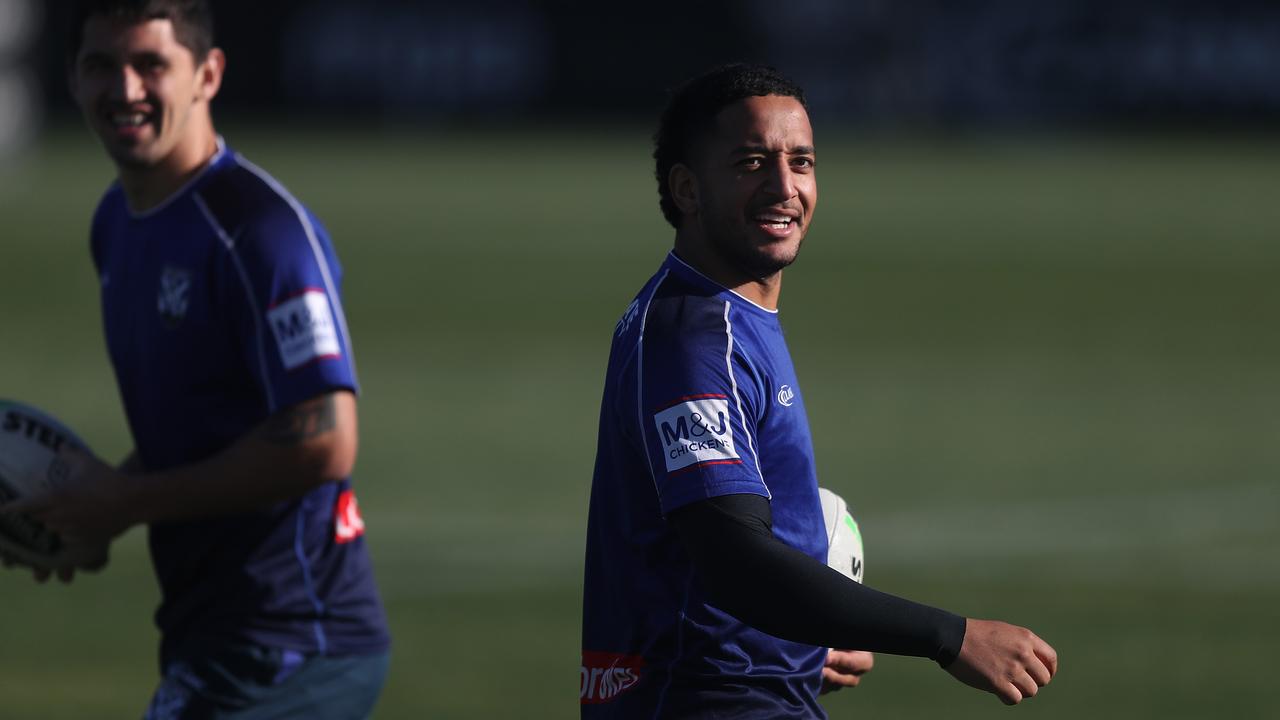 Brandon Wakeham will partner Kyle Flanagan in the halves against the Sharks. Picture: Brett Costello

And Barrett will give the powerful ball-carrier that chance by selecting him at left centre, with the experienced Will Hopoate set to lockdown the right-centre spot.

Hopoate’s move to the centres paves the way for South Sydney recruit Corey Allan to play his first game in Bulldogs colours at fullback.

The Sharks are expected to field an almost full strength line-up with only forwards Aiden Tolman and Toby Rudolf likely to miss the match due to minor hamstring injuries.

Tbaz gets his first major tick of approval in team selections from me by having Lewis as the last resort option in the halves. It’s quite refreshing after Pay’s reliance on him.

BEAST MODE said:
So where's the team?..lol
Click to expand...

I don't like Cotric at left centre, I just can't visualise this working. Him and RFM are going to end up on the right touchline carrying the ball ffs.

Teams are up on NRL website for some teams only, the bulldogs are TBA and the sharks are TBA on Thursday..

Where is the team?

BEAST MODE said:
I don't like Cotric at left centre, I just can't visualise this working. Him and RFM are going to end up on the right touchline carrying the ball ffs.
Click to expand...

Will Cotric even see the ball with RFM on the inside?

Spoonman84 said:
Will Cotric even see the ball with RFM on the inside?
Click to expand...

@finchie said Waddell will actually start ahead of RFM so Cotric might get lucky..

Spoonman84 said:
Will Cotric even see the ball with RFM on the inside?
Click to expand...

I expect to see a different rfm.. pays instructions to him stifled his game..

Suave said:
Wait, so does this count towards Thompson's suspension? Unless he's carrying an injury?
Click to expand...

It says suspension is the reason but I thought trials didn't count towards reducing suspension. There was a mention of a hamstring issue he had a few weeks back. Maybe that's the reason?

WHERE IS THE FUCKING TEAM

GDR said:
I expect to see a different rfm.. pays instructions to him stifled his game..
Click to expand...

We have to see a different RFM really. RFM coming back in to the ruck and denying Cotric ball would be frustrating as hell.
M

Spoonman84 said:
I reckon Katoa could be a smokey if he is as fit as people are saying. There’s not much between Katoa and JMK but I think Katoa is more of an attacking threat.

JMK had a underserved mortgage on hooker over the last few years so a big game from someone on Saturday could give them the start in round 1.
Click to expand...

Katoa is a woeful defender though. Hopefully he’s improved.

Where is our team announcement I know it's only a trial etc but I'm keen to get some more clues about what Baz is thinking. Things like, who's playing 5/8, who's coming off the bench at dummy half when Katoa knocks up early, will Jacko play edge or lock, does Cotric look like he can handle the defence at centre etc....

Couple of interesting selections in other trials - Reimis Smith named at centre for Storm and Connor Watson actually picked at lock (as some said he would be, but I couldn't believe it).
You must log in or register to reply here.
Share:
Twitter Reddit Pinterest Tumblr WhatsApp Email Link
Top